New World "It has good bones" - But does it actually?

Admin
I was hyped for New World more than most people I think.

I was making fan films in the betas

So I decided to go pretty geeky this weekend and broke out the Lord of the Rings Trilogy extended cut. I needed something to pass the time before New World came out. Needless to say it has refueled the fire behind my love for fantasy stories and the immersion they create. It all started with...

I was tweeting about it non stop as a part of the Content Creator Program:


I was making actual RL items thinking about it non stop: 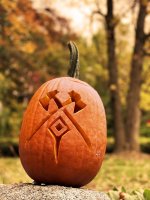 
And on Release, my community and company went hard. We put hundreds of hours into the game and just soaked it all in! Beautiful world, sound design, made us overlook everything else: repetitive quests, poor lore, server issues, and bugs. We even looked past the massive changes to core gameplay from closed beta to open beta to live. We figured “it can’t be that sweeping, it must be a middle ground”. We had hope and trust in the developers. And we thought finally we can validate this hype and get ready for an adventure away from real life!

But fast forward to today and our company of 100 is down to 5 active members. Recruitment posts don't get answered anymore because there are no new players to recruit. We are all but dead in the water. Recently we just all transferred servers because we were on a server with less than 100 people. And while it was nice to see the people around towns again and get OPR etc, it was also disheartening to see how some companies who owned territories basically ignored the market values, controlled all the money, and created a very uneven game where you now had PvP players fighting PvE players instead of looking to Amazon to make the synergy, rather than the angst...

New World - Amazon has divided PvP and PvE players in a deflection from their OWN incompetence.

This game is no longer about community and creating them. It is about watching the only people with thick enough skin to stick around, leave and wonder, when is the plug going to be pulled. 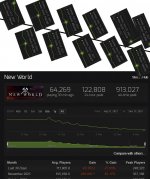 The watermark and even the new "adjustments to it" has completely taken away the excitement of progression for me in his game and turned it into a "generic MMO as defined by the masses" versus an innovation. However, like I said, I look forward to playing together in some of the holiday events and such. But I will be scaling back my personal time new world by a lot now that we can take it at our own pace. Which will probably make the time I do play better, IF the game doesn't make it so by not no lifting it, I cripple my ability to play. I am not looking forward to trying new builds in the future when I can't buy items off the AH. I feel like I will be extremely crippled by the RNG of it all and the lack of my want to craft.

And I cannot be the only one, every Sunday since the start the game has lost thousands of players. It is now starting to lower the amount per Sunday, but the pool is also smaller, so it is similar loss every week, about a 10% drop in player base every week, maybe even more.

While yes 100k is and can be very healthy for an MMO, on this game, and with Amazon's mindset, and the odd mechanic choices of towns, factions, income, t5 upgrades etc, I don't think this is considered successful or sustainable, and I predict a swift shutdown. The fact that they are using Amazon India Customer Support from PRIME for the game, makes me think they just don't give a fuck or have NO idea you need to separate the "amazon" from the "game" part of this.

So at this point, the transfer was to enjoy the game while it lasts. On a dead server, the game is HORRIBLE, on Eden it is tolerable. But in the end, I am not sure what the hell they could even do to pull this one out of the gutter, which really sucks because they truly had a hardcore userbase ready to leave MONTHS to YEARS of their lives in their game.

I know a lot of people "hate on WoW" but there is a difference that should be seen as to why WoW was so broadly successful and New World is now not really in any niche or broadly successful. It has an identity crisis.

New World if you don't know started out as a full loot, base building, hardcore survival PvP game. It had a Dark Souls like combat system, with stagger mechanics and counters to just about ever attack. It had many flaws though, such as full drop loot mechanics and other features that do not make...

The difference between amazon and blizzard is blizzard built a world worthy of getting immersed in, amazon made the beauty of a world but beyond visiting it to enjoy the views and (INCREDIBLE SOUNDSCAPE), there is no reason to not go home and play a another video game with better views and an immersive experience to go with it.

They created a beautiful façade to look at, to tickle your senses, to pull the right psychological strings. But in the end, it was to make a great twitch stream or a fun tweet. It wasn't to create a progressive world and story. There is nothing tying it all together. There is ZERO synergy between any of the game's development aspects and it shows.

You can make a beautiful film and call it artistic, but without a story it is just a showcase, not a world, that is WHAT AN MMO needs to thrive. WoW had history, lore, and so much more. But not only did it have it, it was IN the world beyond "notes" laying around. It was in the quests, the flavor, the world. New World it was in tweets or a sponsored stream that 99% of people won't see. There was never a reason to "explore" Aeternum beyond the beauty, and as we know, beauty if only skin deep.

So I no longer believe New World "has good bones" I believe it is rotting fast and will soon become ash under a very beautiful and dopamine inducing outer layer. And for that, it is a shame.

Even if they did fix the bugs, add more quests, make a few more dungeons, the mechanics going into the game on top of the already grind filled (which is not innovative at all, "all MMO's are grindy" is not what was being sold to us with New World) experience, gates old and new players out of even trying new content if it were to release. And then when we do finally waste hours upon hours of time to get there, the new content, as great as it might be, why are we doing it? What is the story? Who are we striving to be? What are we striving to do? There are no bones.

There is just an empty shell of a game that is hemorrhaging players and potential through poor design choices made before we even got here. Like Aeternum, there were holes in this plot line so deep that we cannot fix them with a patch, but unlike Aeternum Amazon is not going to keep an MMO that Bezos wanted to be "the greatest MMO in history" alive with just a couple thousand players, if the trend continues the way it is. And like the previous games AGS has released, this too will be shut down, and there will be no eternal life for Aeternum Afterall.

Honestly, we have no reason to care either, other than those dopamine hits, this game is excellent at giving. It is also quite good at adding new skins and cash shop items magically, while breaking all other aspects of the game. Not once has that cash shop gone down.

Things most players don't even know:
Soo like me, maybe once you stop, look around, and see the track marks, you re-evaluate what is gaming to relax and unwind and get lost in a magical world where you have choices and feel as if you are making a difference, and gaming that is was sold as an exploration but is truly just a very closed off, fenced, time gated linear path to no where specific other than "PLEASE PLAY MORE SO WE MAKE MORE MONEY", by a company who is using amazon prime support to "assist" its player-base.

We went from a game about choice, to a game that forces you to have to choose EVERYTHING or you fall behind. Devaluing choice, mechanics, and personal accomplishment amongst diverse playerbases.

*P.S. I believe you do look at all reports and it is not automated, I just believe that the customer support truly has NO IDEA what they are doing to be able to not treat a mass report as an easy check mark on their quota for the day of tickets to finish thus, pretty much automating it, but with people.*

P.P.S. I also believe their forums for "Bug reports in the public" is the worst choice in the history of online games as well as their "tell us what is wrong with the balance of mechanics in our game and we will pass it along to the devs.

There is a saying in video games "Players are really good at telling you when something feels wrong, and they are usually right, but they are terrible at solving the problem"

This is where a dev team needs to take the feedback and try things on the PTR until it feels right again. But crowd sourcing your solutions through forum topics of the top 1% of players is an odd choice, borderline lazy or dismissive.