Why I switched to Opera from Chrome and don’t think I will go back. 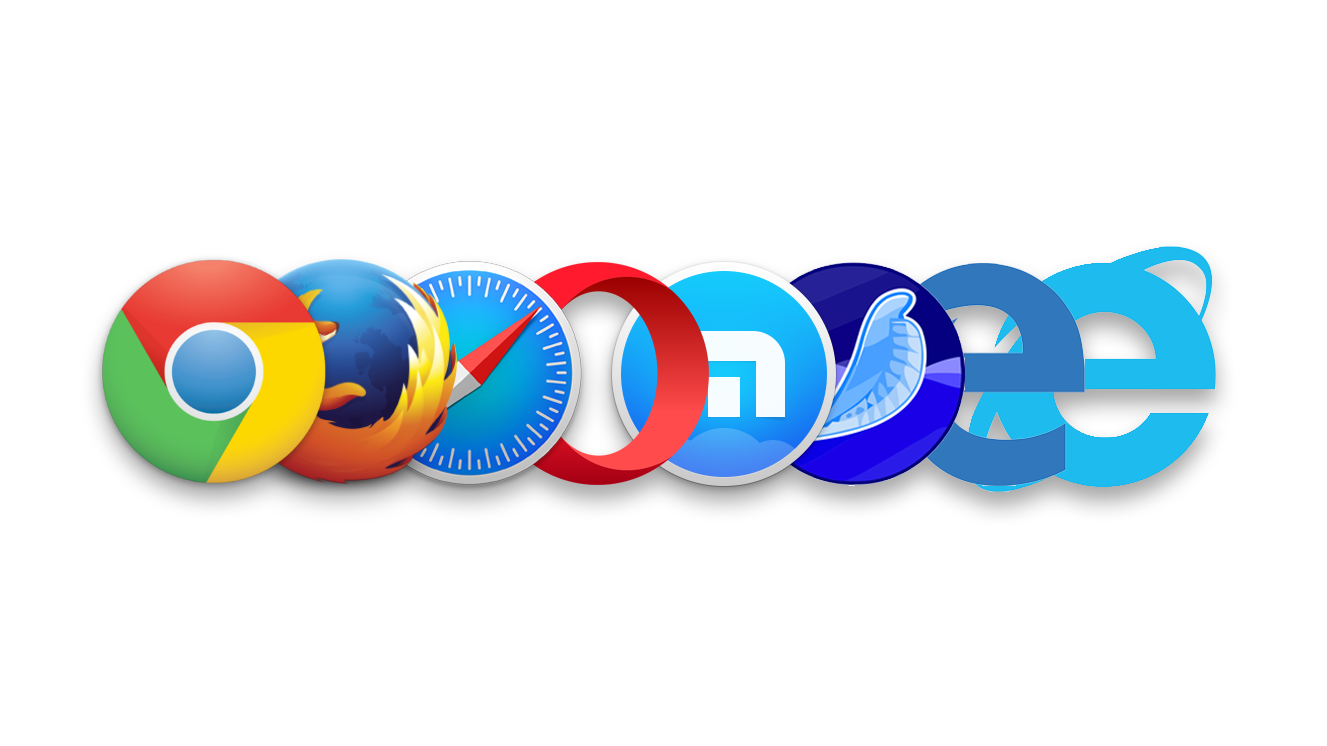 I personally have every major browser installed on my system — the needs of my job require it. But if I wasn’t burdened by that, I can confidently say that I’d be an Opera man and un-install chrome completely. Despite using Chrome for the past 4 years, I recently switched to Opera, and here are my reasons why. But if you want to skip all of it, it is because Opera doesn’t eat my RAM and CPU as much as Chrome did by a MILE. And I have a BEAST Computer.

In this day and age, it doesn’t really matter which browser you use. They all get the job done and none of them are end of the world bad. There’s only one real reason to pick one over another: the little nuances are more in line with how you like to browse the web.

1. Opera Is Faster and More Responsive​

Lots of users hold Chrome up as the gold standard for browser performance. I won’t deny that: Chrome is certainly fast! But having used the browser on all kinds of devices — a four-year-old laptop, a two-year-old PC, a brand new macbook, and an upper-class Chromebook — Chrome is surprisingly underwhelming.


It isn’t all about browser benchmarks. In fact, last year it was compared benchmarks for Chrome and Opera and found that Chrome outperformed Opera in JetStream, Kraken, RoboHornet, and HTML5 Standard tests. But in daily use, Opera feels snappier, smoother, and more responsive than Chrome.Which Browser Is Best? Edge vs. Chrome vs. Opera vs. Firefox Which Browser Is Best? Edge vs. Chrome vs. Opera vs. FirefoxThe browser you’re using right now may not be the best one for you. The browser arena changes so frequently that your conclusions from comparisons made last year may be completely wrong this year.
Perhaps this goes to show that “laboratory conditions” aren’t enough to judge browser performance. Maybe there are other invisible factors that affect speed and responsiveness. Or maybe it’s all in my head. But Opera feels faster and that’s all that matters to me.

A lot of people feel trapped into using Chrome, and one of the main reasons involve Chrome’s massive collection of active browser extensions: some extensions are so important that users feel they cannot live without them. 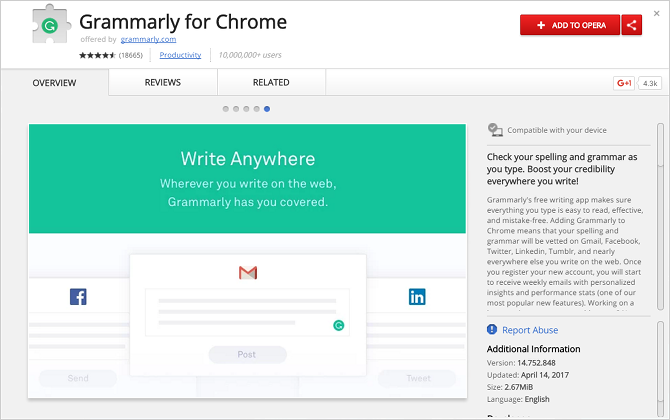 But that’s no longer an issue. With the Download Chrome Extension extension, you can directly install any Chrome extension in Opera. It’s extremely easy to use, too. Once you have it, you just browse the Chrome Web Store like normal, find the extensions you want, and click “Add to Opera”.

In our web browser comparison, Opera demonstrated power equal to that of Chrome. It makes sense seeing as they both use the same engine. However the incredible thing is that Opera consumes less memory: 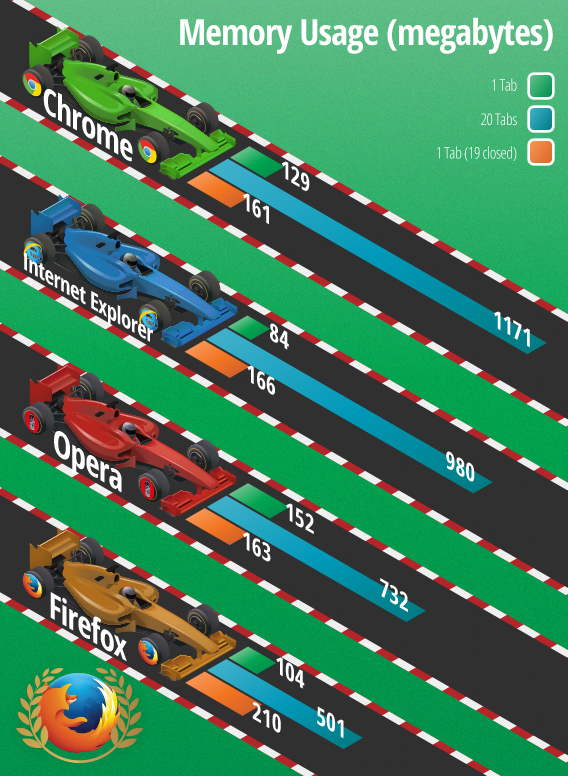 Opera handles memory much better than Chrome; second only to Firefox.
We’re not sure what kind of optimizations Opera has applied to the Blink engine, but one thing for sure is that the results have been very successful: the way Opera incorporates memory management makes it better than Chrome for those with less powerful computers.
In general, Chrome is CPU intensive. This can be a problem for old and new PCs because it leaves less CPU for other tasks, resulting in slower system performance. But it’s an even bigger problem for laptops: heavy CPU usage means faster draining of battery life.


This is why you should avoid using Chrome on MacBooks. But Opera offers a double benefit over Chrome: not only does it use less CPU during regular usage, it also comes with a Power Saver Modethat prolongs battery life when you really need it. For many people, the first thing installed on a new Macbook is Chrome. It makes sense: in its early days Chrome gained a reputation for being lightweight and fast.
While active, the mode reduces activity in background tabs, pauses unused extensions, reduces the browser’s frame rate, pauses browser animations, and optimizes JavaScript timer scheduling. Opera claims it can extend battery life up to 50 percent longer than Chrome.

Not only does Opera need fewer resources and less battery life than Chrome, it can also minimize bandwidth usage through something called Turbo Mode. If your internet activity is limited by ISP data caps, such a feature can prove immensely useful and even save you some money.


With Turbo Mode enabled, your internet traffic is routed through Opera servers so it can be compressed before it reaches you. Note that this only works on unencrypted pages, so HTTPS sites won’t be compressed.

5. Opera Is Its Own Unique Experience​

Like Chrome, Opera is derived from the Chromium browser. Other examples of Chromium-based browsers include Brave, Comodo Dragon, Slimjet, Torch, and Vivaldi. But whereas most of these browsers feel like “Chrome alternatives,” Opera very much has its own identity.

This is mainly because Opera has several unique features. Its iconic Speed Dial is a nifty substitute for the bookmark bar. Mouse gestures grant control of the browser without a keyboard. The built-in RSS aggregator is great for staying on top of news. Pop-out player lets you watch any online video while browsing the web. Extensions can be pinned to a dedicated sidebar. The list goes on! Let’s explore eight of the best Opera features that will make browsing smoother and more convenient for you. We bet you’ll want to start using them right away.
But one of my favorite aspects of Opera is native support for custom keyboard shortcuts. You can change the keypresses for dozens of different browser actions, and you can assign multiple shortcuts to each action. Chrome can only do this with extensions, and even then not so comprehensively.
One quality of life feature, is the smarts of Opera to stop a youtube video in one tab if I start another in another tab. LOVE IT.

Opera turned a lot of heads when it introduced its built-in VPN back in 2016 — a VPN that’s 100 percent free and unlimited. This is in stark contrast to a lot of other free VPN services, which have significant limits and restrictions.


Why should you care about this? Because it boosts your privacy and security while browsing the web. It isn’t perfect, mind you. Free VPNs have drawbacks and Opera’s VPN isn’t exempt. However, if you don’t want to pay for a VPN, then it’s one of the better ones. Benefits include:Finally Get a Paid VPN Because Your Free VPN Won’t Cut It Finally Get a Paid VPN Because Your Free VPN Won’t Cut ItVPNs are all the rage, but if you’re thinking of going the free route, please reconsider. Free VPN services come with risks that may not be worth taking…READ MORE
I actually use a paid VPN (we recommend ExpressVPN) but if I wasn’t, I’d be using this one instead. Learn more about it in our overview of Opera VPN.

When using Opera, you get the feeling of using a neutral browser that doesn’t favor any of the major corporations. In this sense, Opera is a lot like Firefox, except that it uses the high-performance engine as Chrome, which in our comparison has proved ideal for opening large websites.
The only reason to choose Chrome over Opera is for its integration with Google services. But if you want to keep using extensions and Chrome technology without the obligation of creating a Google account, Opera is definitely a more interesting option than Firefox.
In terms of the “morality” of browsers, Opera has a much better reputation than Google, especially when it comes to user privacy. Whereas Google is a monolithic (even exploitative) data-gathering company, Opera is smaller and more in-touch with users
Opera’s built-in ad-blocker is a good example. Knowing that people want a clean and non-intrusive web experience, it implemented an ad-blocker that’s resource-friendly, fast, and effective. In general, Opera seems to have more respect for its users than Google does.
On the flipside, Google has no respect for Opera. Let’s not forget that, in 2012, Google tried to nag Opera users into using Chrome. As Google grows bigger, it becomes more appealing to rebel and pursue alternatives.

Of course, I still overtax my machine with way too many tabs (I have 20 open right now), and a couple times a week a tab or two will start gobbling tons of RAM.

This is how many tabs I had open when I wrote this.

This is what the same number of tabs looks like on Chrome.
This is where Opera’s best and most important feature comes in: When you’ve got too many tabs open, Opera stops working but it doesn’t fuck up your entire computer. In practice, this means that you get a beachball cursor and can’t do anything in the browser. You can then force quit Opera, reopen it, and be on your way within 10 seconds. Mildly annoying, but not day ruining.
When recovering from a crash, the browser doesn’t try to load every tab at once.

Everything these days has a "gaming iteration" But this version actually knows what it is doing putting performance and discord/gaming forefront: 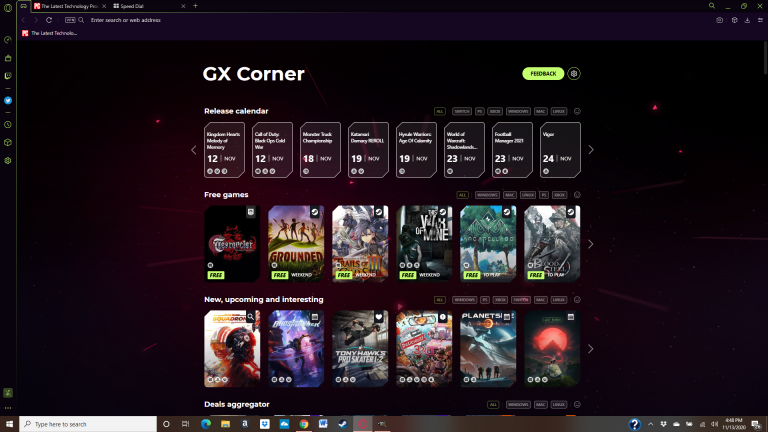 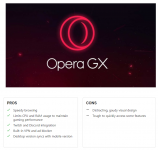 Now that I’m on Opera, I’m happy to report that I feel no temptation or urge to return to Chrome. There used to be one feature I missed — Chrome’s user profiles — but this has been added. Opera’s benefits more than outweigh it.

For those who can’t leave Chrome for another browser, there are memory management extensions that can help you:
Click to expand...

TooManyTabs is a great tab and memory manager with an easy to use and understand interface. Once installed, you will see this popup window where you can get a glance of all the opened tabs in that particular Chrome window. You can then choose to suspend tabs that you want to keep for later reading, freeing up some memory from Chrome so it runs faster and smoother.

Tab Hibernation is a one-button tool that instantly puts all other tabs except the one you are currently vieweing into hibernation. Once installed, a button in the shape of a crescent moon will appear at the end of your address bar. Clicking on it will hibernate all your other tabs, freeing up Chrome’s memory for a smoother web surfing experience. To wake up a hibernated tab, just click anywhere.

If you’re someone who surfs the web using lots of tabs and browser windows, OneTab compresses all the opened tabs in that particular window into one tab, so you can see the content of all opened tabs. Doing this also frees memory from Chrome. You can then choose to close tabs, open them one at a time or restore them all. You can also group these tabs into a special category, enabling you to open it at a later time.

The Great Suspender helps you suspend tabs to free up some of Chrome’s memory. Clicking on the Great Suspender button lets you choose from suspending the current tab, suspending all other tabs or restoring all your tabs. The tool allows for automatic and manual suspending, configurable in the settings. The settings also allow you to set a whitelist of sites that won’t get suspended.
You must log in or register to reply here.
Share:
Facebook Twitter Reddit Pinterest Tumblr WhatsApp Email Share Link
Menu
Log in
Register
Top Bottom